The record had been expected and follows a trend over the last three years of anomalously high winter ice extents around the southernmost continent — a trend that provides a stark contrast to the inexorable decline of Arctic sea ice, which it’s sixth lowest summer extent on record last month. (Seasons in the Northern and Southern Hemispheres run opposite each other.) 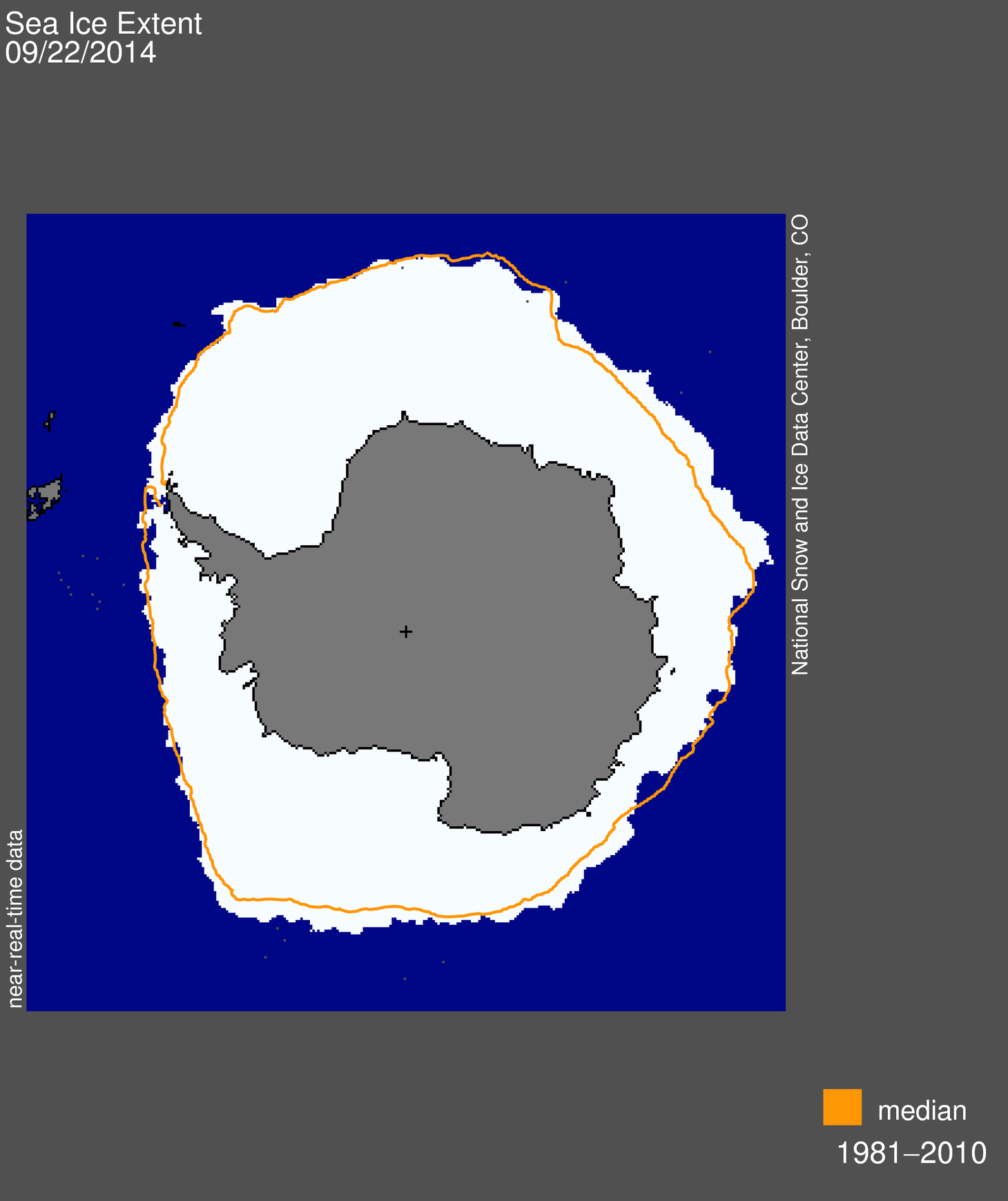 Antarctic sea ice extent for Sept. 22, 2014 was 7.76 million square miles. The orange line in the figure shows the 1981-2010 average extent for that day, and the black cross indicates the geographic South Pole. (NSIDC)

The growth of Antarctic sea ice in the winter exhibits more short-term ups and downs (seen as wiggles on the graphs charting the growth) than Arctic sea ice does, and so the Antarctic maximum takes longer to emerge from the noise. Scientists have to wait until they see a clear downward trend before declaring the official maximum.

This year wasn’t just notable for the final maximum extent, though, as “nearly every day has been a record for that day in the satellite record” this year, Ted Scambos, a senior scientist with NSIDC, previously told Climate Central.

While the melting of Arctic sea ice — which on the whole has declined by 4.52 percent per decade, according to the NSIDC ­— has a very clear connection to global warming, the forces behind the growth of Antarctic ice are murkier, and scientists like Scambos are still teasing them out.

The two main contenders are shifting winds around the Antarctic continent (possibly linked to the ozone hole or the warming of the continent), which could be smearing the sea ice out over a larger area, and a pool of fresher water around the continent resulting from the melting of continental glaciers. The growth of Antarctic sea ice through the austral winter (summer in the Northern Hemisphere), as compared to 2013 and the 1981-2010 average.

That fresher water may provide a more stable environment for sea ice to grow in, Scambos said.

Which factor is the dominant one behind the sea ice growth of recent years could affect whether the record growth continues, Scambos said.

If the melt of ice-bound land is the main driving force, then “the trend is not going to go away very easily,” he said, as more of that ice is bound to melt as the world warms. Blood Falls seeps from the end of the Taylor Glacier into Lake Bonney. The tent at left provides a sense of scale for just how big the phenomenon is. (Peter Rejcek/National Science Foundation)